How often do you meet a bloke who used to sell fruit and veg, has a synthesizer called Henry and has actually been to Michael Jackson's house? Not very often. Thomas Dolby tells Dave Rimmer all about...

The Appliance of Science 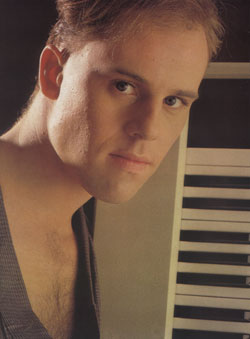 At the tender age of 25, Thomas Dolby has already established himself as an ingenious and inventive songwriter, performer, producer, synthesizer wizard and video director. He's worked with a list of celebrities that takes in everyone from Michael jackson to Magnus Pyke and, last year, managed to become Big In America marginally ahead of the "British Invasion." In fact, about the only thing he hasn't done yet is have a decent-sized British his. Precious efforts, like "She Blinded Me With Science" and the excellent "Windpower," have only ever nibbled at the bottom of the charts. Perhaps "Hyperactive," his new one, will do the trick. "It's important not to get too worried about it," he shrugs, brushing his black cat Boris from his lap. "Some of what you do is accessible and some isn't."

Thomas Morgan Dolby Robertson was born around 26 years ago in Cairo. His father was an archaeologist who travelled round identifying fragments of Greek pottery, and Dolby moved around with him until he was 12. While at school in England, France, Greece and the US, he sang in a few choirs, taught himself guitar and piano and formed his first band at the age of 15.

He left school a year later and while trying to hold down a succession of awful jobs in fruit an veg shops and companies making flea collars for cats (really!), looked for a way to make a living out of music.

His first professional job came in 1978 with a group called Camera Club. He toured the US with Lene Lovich and wrote "New Toy" for her. This became a minor hit and Dolby decided writing songs was the thing for him.

"I looked for a deal and succeeded only in running up lawyers' bills," he remembers. "I had to flee the country because of legal debts."

He left his tapes with his lawyers and disappeared off to Paris where he busked in the metro and played in restaurants. Back home there was a bit of interest. The independent label Armageddon released a single, "Urges". Dolby's big break, though, was being invited over to new York to play keyboards on a Foreigner LP. He was there for a month and earned enough to come back to England, pay off his debts and form his own label, Venice in Peril, through which he signed to EMI.

The work with Foreigner was the first in a whole series of collaborations. Dolby has since worked with all sorts of unlikely people.

Like Joan Armatrading: "I hardly spoke to her. She was playing Space Invaders most of the time."

And Malcolm McLaren. Dolby did some session work on "Duck Rock".

"Malcolm wasn't even there. I only met him after I'd done it. I walked up and introduced myself to him at a party: 'Hi! I'm, the bloke who played keyboards on your album.' And he said: 'Oh yes, and your name is?'"

And then, of course, there was Michael Jackson. Dolby says he was "incredibly flattered" to get a call from him when he arrived in Los Angeles last March. He went round to Jackson's house, which was apparently "full of art treasures, local kids and little cousins of his". Jackson was "odd," Dolby says, "but funny. Really, really funny. He is totally into his music and lifestyle and rules the roost". While Dolby and Jackson--seated "in a big medieval throne"--talked, faces kept peering through the bannisters from upstairs. Presently "She Blinded me With Science" came booming from a bedroom. Jackson said: "They just can't believe you're the guy on the video."

Back in '81, Dolby began preparing his solo career. With his advance from EMI he bought a thing called a "wave computer" --a complex digital synthesizer--which he christened Henry and used to write most of the material for his first LP, "The Golden Age Of Wireless". As he was spending most of his time fiddling with electronics, he parodied what he was up to by coming over on videos and record sleeves as some kind of mad scientist: white coat, specs on the end of the nose, some weird bit of machinery in his hand or lurking in the background. A lot of these old props now litter his small Hammersmith flat. In one corner of his living room there's a giant control panel that looks as though it's been rescued from an old Frankenstein movie.

The boffin bit "reached a peak" with "She Blinded me With Science" last year. For this Dolby made a video with the authentic mad scientist Magnus Pyke and used his voice on the record. It was only a minor hit here--Dolby reckons the appearance of Dr Pyke meant most people dismissed it as a "novelty record"--but really took off in America.

"They'd never heard of Magnus Pyke. They just thought he was some kind of daft bloke"

The video--in my humble opinion one of the best promos ever--got "heavy rotation" on MTV just as the cable channel was beginning to take off. The result: lots of attention for My Dolby and a very large hit all over the world. Except here.

Dolby's given up on the technological thing now. Partly because he was bored with it; and partly because Henry "blew up" in Sheffield last year and he's gone back to working with ordinary musicians. On the "Hyperactive" sleeve (see Start January 5) he no longer looks like a mad scientist. He just looks...mad.

In reality he's a quietly-spoken and friendly chap who reckons he's "not a natural entertainer". In February he has a new LP out, "The Flat Earth", and is also beginning quite a hefty tour. For all that he's at his happiest being "a backroom boy".

His ambition, he answers without hesitation, is "to write film music".

"I often play along with the TV. It's interesting. Like if you do a dah dah da-a-a-a-ah when someone walks into a room it turns them into a villain.

"Yes, I can really see myself in a few years time, sitting in a country cottage somewhere with a few instruments writing film music."

But not yet though.